Virginia is well known for its history, but it’s quickly gaining recognition as a world-class outdoor destination, too. So why not combine both into one epic Virginia vacation? These twelve historic destinations also happen to have connections to the Great Outdoors, making them ideal spots for an active (and history-filled) summer vacation. 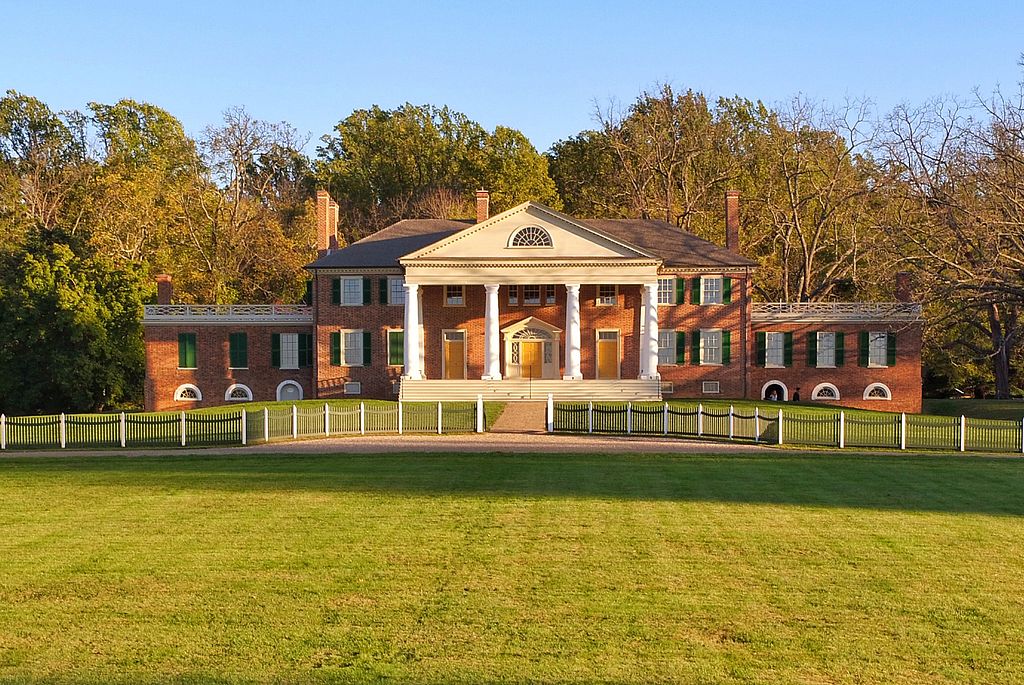 There are over 8 miles of walking trails within James Madison’s Montpelier estate, winding through horse pastures, wildflower meadows, and forests. Plan your route along a few of the different trail loops to catch stunning views of the Blue Ridge Mountains. One of the most popular trails filled with history, the Montpelier Civil War Trail is a one mile trail that follows the path of McGowan’s Brigade, passing the archaeological remains of a Confederate winter camp. This route also connects to the farm of George Gilmore, a Black man who was born into slavery in 1810 but would live to become a farmer and landowner after Emancipation swept through the South.

As the Civil War drew to a close, Confederate General Lee met with Union General Grant at the McLean House within Appomattox Court House National Historical Park to draw up the terms of surrender. Visit the park today to see historical actors tell the stories of local residents during the day in 1865, and then wander the miles of hiking trails within the park property as you imagine what the landscape would have looked like during the close of the Civil War. From the North Carolina Monument, follow the History Trail, a 4.5-mile trail that encompasses areas where both Union and Confederate armies were fighting during the Battle of Appomattox Court House. The trail runs through open fields, shaded woods and the picturesque Appomattox River, ending at the site of Lee’s headquarters during the surrender. 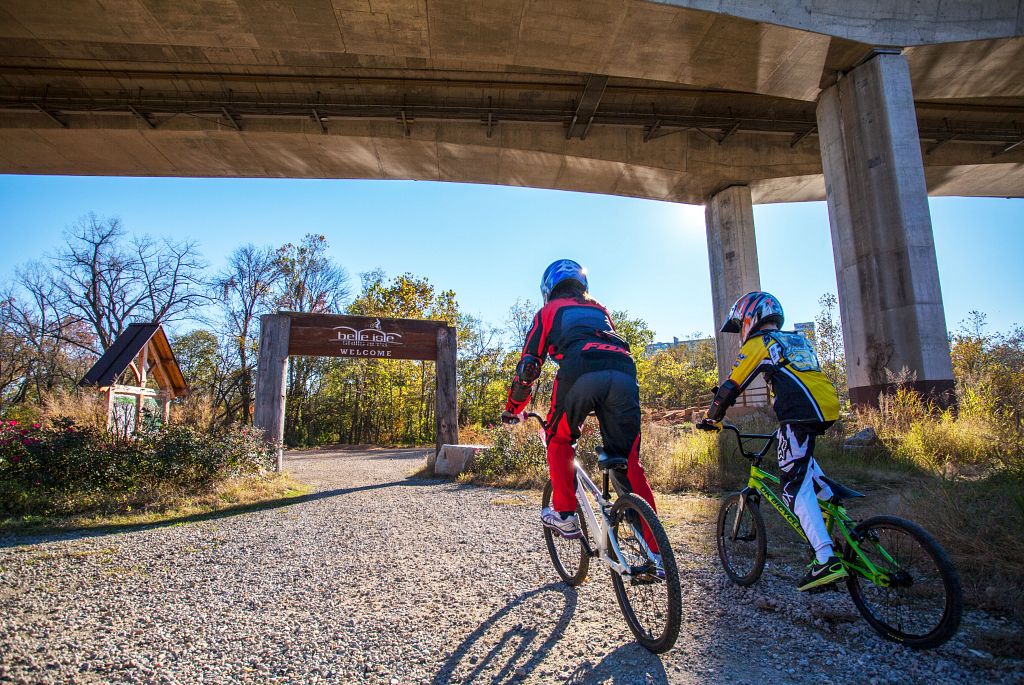 In the heart of downtown Richmond, Belle Isle Historic Park was originally explored by Colonial Captain John Smith in 1607 and named Broad Rock Island. The island was already inhabited by indigenous peoples, but these native inhabitants vacated as Colonists moved further inward. After Colonial establishment, the island’s purpose changed over time, housing an iron and nail factory in the early 1800s, a small village complete with a school, church, and general store in the early 1860’s, and then a prison encampment for about 30,000 Union soldiers during the Civil War. Today, you can take the pedestrian bridge across to Belle Isle by bike or by foot and follow the trails that encircle the small island, or bring your mountain bike along to conquer the single-track trails in the hills of Belle Isle. Water sport enthusiasts can raft or kayak down the rapids of the James River, although the waterway is best suited for experienced paddlers. 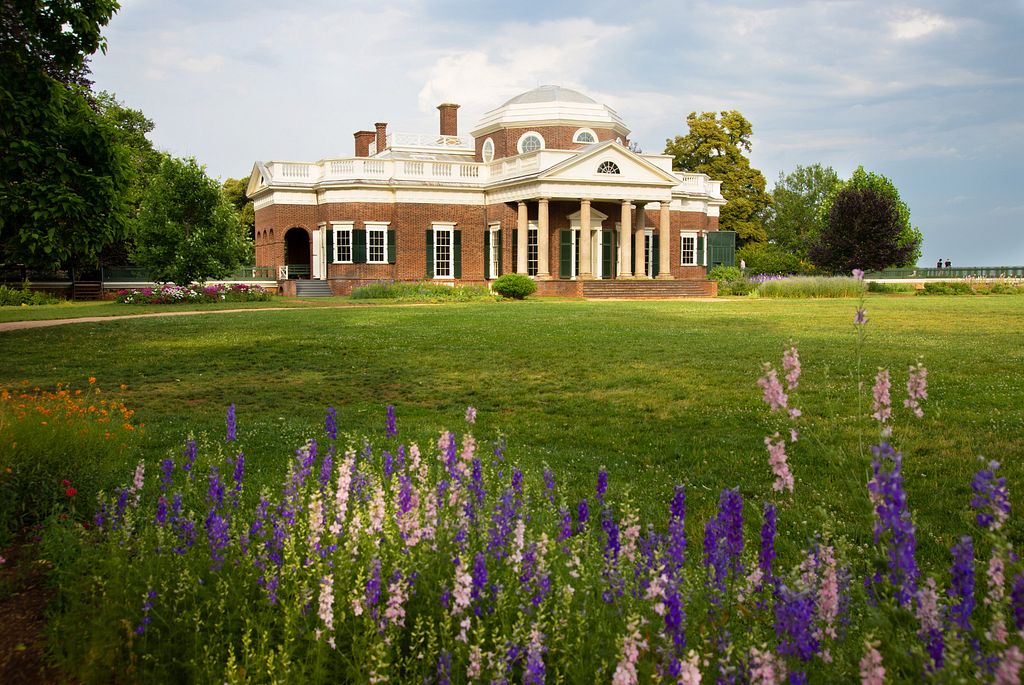 Thomas Jefferson’s Monticello estate is often considered his masterpiece. He designed, built, and made additions to the property over a 40-year span, continuously making changes and improvements to the property that integrated ideas and inventions of his own design. Fourteen varying trails surround Monticello today, welcoming visitors to explore the grounds after touring the historic home. For spectacular views of the Blue Ridge Mountains, take the four-mile round trip Saunders-Monticello Trail through native hardwood forests, open pastures, and deep ravines. 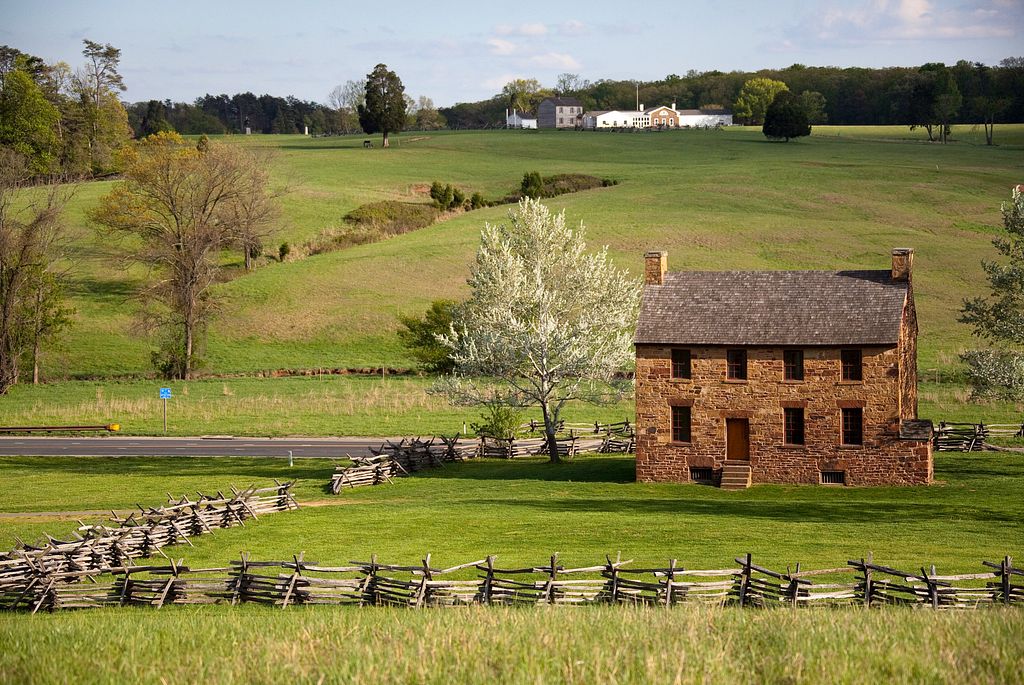 Manassas National Battlefield Park is the site of the first major battle of the Civil War, the Battle of Bull Run, as well as the Second Battle of Manassas, which led General Lee north to invade Union territory. Take a guided tour of the battlefield on foot and then hike, bike, or horseback on over 40 miles of trails within the 5,100-acre park.

Located south of Alexandria, George Washington’s Mount Vernon estate is one of Virginia’s most beloved historic sites. Rather than driving to or from Alexandria, consider taking the Mount Vernon Trail, an 18-mile multi-use paved trail that stretches from the estate to Theodore Roosevelt Island, connecting with regional trails along the way. You can either bike or walk the trail to Mount Vernon, and public restrooms, picnic areas, and trash cans spaced along the trail allow for necessary breaks.

Colonial National Historical Park contains several iconic historic sites within the 8,600+ acres of coastal preserves, including the Colonial Parkway, Historic Jamestowne, the Jamestown Settlement, and Yorktown Battlefield, with Colonial Williamsburg on the border. The park spans parts of the City of Williamsburg and York, James City, Gloucester, and Surry Counties, extending between the York and James Rivers. Hiking and biking are popular outdoor activities within Colonial National Historical Park, as well as kayaking, canoeing, and fishing on the rivers. Bikes are permitted on most of the Colonial Parkway, but you can also tour Yorktown Battlefield on a seven-mile Battlefield Tour, marked by red arrow signs, or a nine-mile Encampment Tour, marked by yellow arrow signs. Also, both the TransAmerica Bicycle Trail and the Virginia Cross State Ride have trail access points at the Yorktown Victory Monument. In addition to biking, Patriot Tours & Provisions offers Segway, kayak, and paddleboard tours that combine the Great Outdoors with Virginia’s rich history. 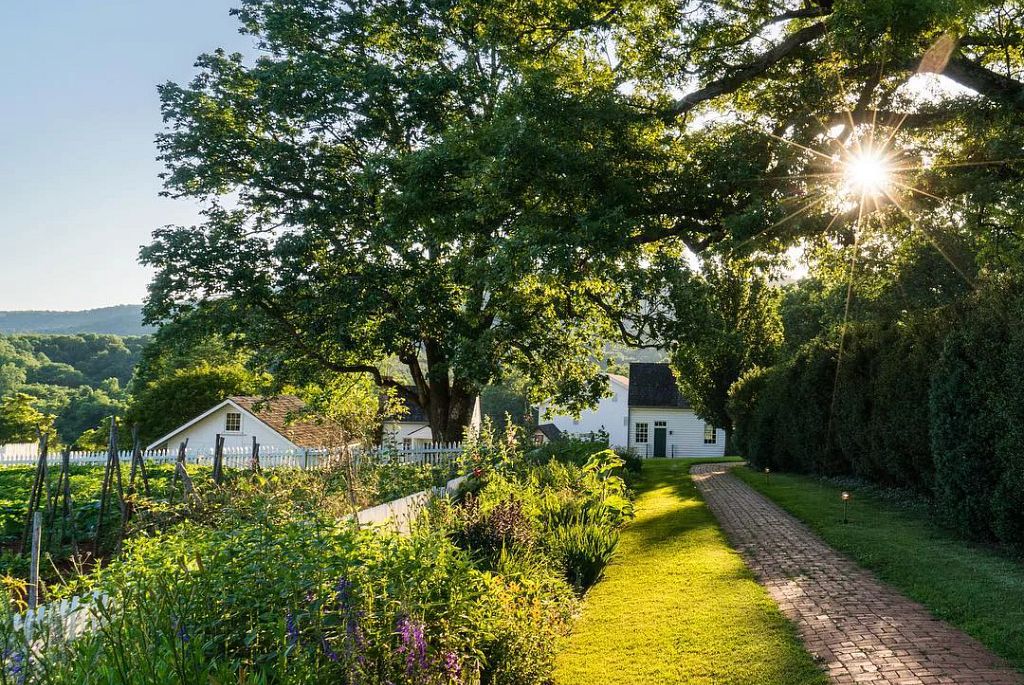 James Monroe’s Highland estate in Charlottesville is just down the road from his close friend Thomas Jefferson’s Monticello, and if you’re in the area, you should make a plan to visit both of these former U.S. president’s properties. Take guided tours of the Presidential Guest House, which dates to 1818 and is filled with original French and American antiques from the same era. After touring the historic home, stroll along the rustic trails that wind throughout Monroe’s 500-acre property. Cycling is permitted on three of the six trails, and horseback riding on the trails may be allowed if arranged ahead of your visit.

One of Virginia’s most awe-inspiring natural landmarks, Natural Bridge State Park has several historic ties to boast. Thomas Jefferson once owned the 215-foot tall limestone gorge, and today, a Monacan Village interpretation inside the park gives visitors a peek into how the residents prior to Colonial settlers would have lived on the lands. There are various trails crisscrossing the park’s mountainous landscape open to hikers. The mail trail, Cedar Creek, is about a mile long, and its namesake watering hole is stocked with fish, welcoming visitors to cast a line. 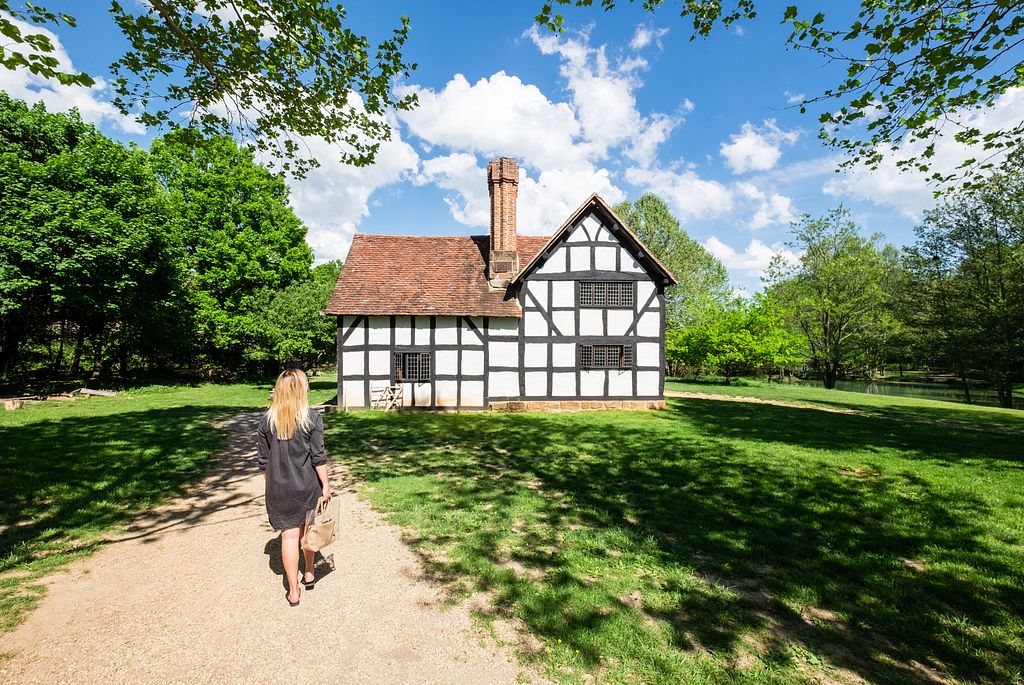 The Frontier Culture Museum of Virginia contains eleven permanent home exhibits that showcase how cultures blended together to influence early American settlements and leading to the diverse cultures seen today, specifically in home life and architectural features. The historically-recreated homes display cultural aspects of European, African, and the Indigenous peoples, combining these influences into American styles that would soon emerge all over the country. During your self-guided tours of the grounds, you’ll follow several miles of walking trails, spending an average of three to four hours taking in the sight by foot.

An historic Civil War site of Virginia, Chancellorsville Battlefield is part of the Fredericksburg and Spotsylvania National Military Park, created to preserve the land and share the stories of the four Civil War battles fought within the 7,600-acre park. In addition to offering a walking tour that tells the story of the Wounding of Stonewall Jackson, the park has about 23 miles of hiking trails within the park open to visitors. 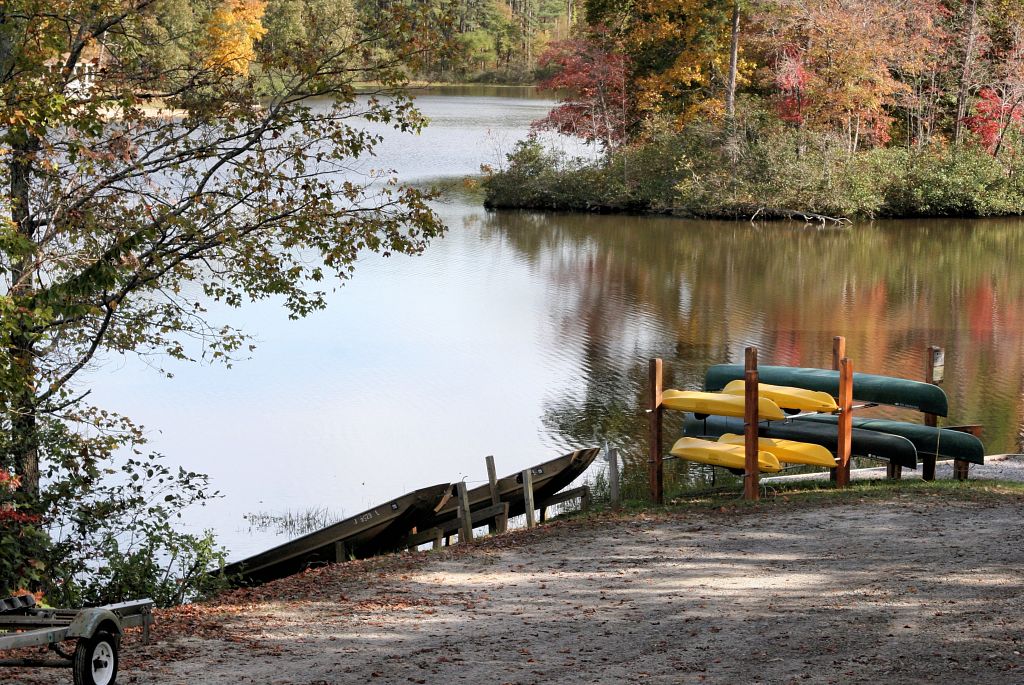 Twin Lakes State Park used to be two distinct parks that were eventually merged. One of these had tremendous historical and cultural significance before the battle for Civil Rights had begun, as it was the only state park in Virginia that allowed Black Americans. With even more notable Civil Rights sites right down the road in Farmville, visitors can learn about the area’s important contributions to equality, then return to the park for a wide array of outdoor activities, including hiking, camping, swimming, and exploring the lake in a kayak, canoe, or paddleboat.